A Brief History of Mayfair

The Mayfair subdivision is one of the oldest in Saskatoon outside of the original three settlements of Nutana, Saskatoon and Riversdale. Part of the land originally granted to the Temperance Colonization Society in 1882, it was in private hands by the time Saskatoon was incorporated as a City in 1906 and was first identified on a map of Saskatoon in 1907, during the height of the city’s first real estate boom.

The first lots were sold that year and the first houses began to be built, primarily along 33rd Street. By 1909 there were nearly 60 houses in Mayfair – at that time still outside of city limits - with a population estimated at around 350. On April 20, 1911, the City expanded, annexing land to the north as far as 38th St. Mayfair was finally “in”.

Over the next few years Mayfair acquired a school and a bustling commercial center along 33rd Street. By 1914, 843 people lived there. Development was steady after the First World War but really took off in the period 1946-1960 when more than one-third of the houses presently standing were built. House construction tapered off slightly through the 1960s (23%) and 1970s (12%). Houses built since 1980 account for less than 5% of the total housing in Mayfair. 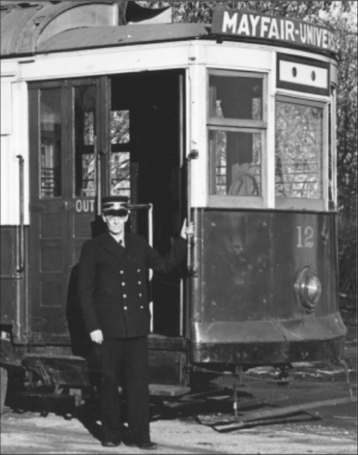 On January 1, 1913 Saskatoon’s Municipal Railway system opened. The Mayfair - University line served the northwest part of the City, running north along Avenue F to terminate at 33rd Street. In 1914 the line was extended east from Avenue F to Avenue A (now Idylwyld Drive). Saskatoon’s last streetcar made its final run down the Mayfair line on November 10, 1951, piloted by Joe Horan (left), one of Saskatoon’s original street-car drivers and a fixture on Mayfair run for many years. Avenue A isn’t the only street in Mayfair to have undergone a name change. The subdivision map printed in the 1912 Real Estate Pocket Guide lists 33rd – 37th Streets as “Albert”, “James”, “Charles”, “Lily” and “Frisco” Streets. The origin of these names is unknown. While they are not used on the “Official Plan of Saskatoon” published by the Board of Trade in 1914, those names do appear intermittently in the City Directories for many years afterwards, and as late as 1957 “Frisco Street” is referred to in official correspondence between the City of Saskatoon and the Provincial Land Titles Office.

Like many of the subdivisions laid out by land speculators during the pre-war real estate booms, the original plans for Mayfair made no provisions for parks or schools. In May of 1912 the Saskatoon Public School Board began raising money for a new school in Mayfair. When the boom collapsed in 1913 construction had to be postponed and some of the completed foundations had to be filled in, to be excavated later. A temporary school was built on the property. After many delays Mayfair School was finally completed in January, 1921, at a total cost of $212,484.

Built on land acquired by the City for non-payment of taxes, A.H. Browne Park on 37th St. between Avenues D and F is another legacy of the pre-war boom and bust as land speculators found themselves unable to sell off their properties and in many cases simply allowed ownership to revert to the City. The only development in the park were three small houses, built in 1913 on Avenue D just north of 37th Street. 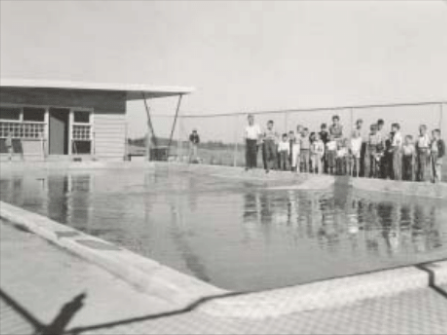 The east half of the park (including the paddling pool) was built in 1955. In 1957 part of Avenue E was closed north of 37th and the
park was extended west to Avenue F. Previously known informally as “Mayfair Park”, it was now formally named in honour of long-time Parks Superintendent Alfred H. Browne. In 1980, with funding provided by the Mayfair Neighbourhood Improvement Plan (NIP) it was re-landscaped. A hill was built in the center, the ball diamond was moved and expanded and new playgrounds, a soccer pitch and basketball court were built.

The Mayfair branch of the Saskatoon Public Library also dates to around the same time. It officially opened on September 23, 1952 in the Mayfair community Hall. A new addition was built in 1955 nearly doubling it in size. That same year the City annexed almost a thousand acres of land north of 38th. Mayfair grew along with it, expanding as far as the CNR tracks just north
of 40th Street which form the neighbourhood’s present north west boundary. Today Mayfair is a solid, primarily working-class neighbourhood with a population of around 2500 people. Although there have been some major changes along 33rd Street in the last few years it continues to be the commercial hub of the neighbourhood and includes institutions like Christie’s Mayfair Bakery, established in 1933.
Jeff O’Brien
City of Saskatoon Archivist
April, 2003